I'm Vincent Woo, the founder of CoderPad, and sometimes journalist.

The Hypocrisy of Aaron Peskin

This piece originally ran on Medium and is reproduced here with some small formatting differences.

How Aaron Peskin got his illegally merged $1.5M “monster” home

San Francisco Supervisor Aaron Peskin is back in the news, proposing legislation with the ostensible purpose of preserving rent controlled apartments by preventing them from being converted into “monster” homes. His legislation would require lengthy and expensive conditional use permits for even basic changes to buildings. Disregarding the fact that this is obviously a bill designed to lengthen San Francisco’s already byzantine permitting process, Peskin is personally guilty of the very crime he publicly crusades against. This is the strange, ridiculous, and criminal story of how Aaron Peskin lives in a monster home that used to be a rent-controlled duplex. 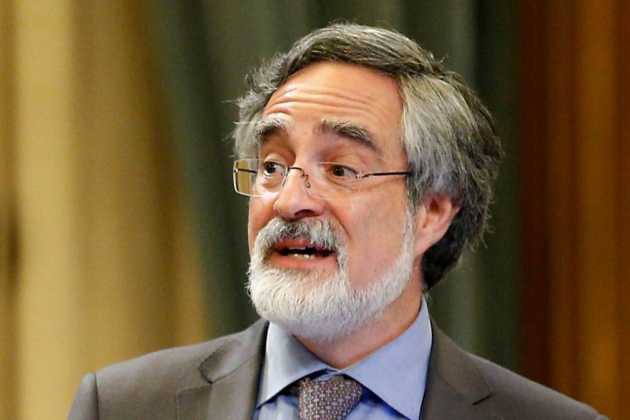 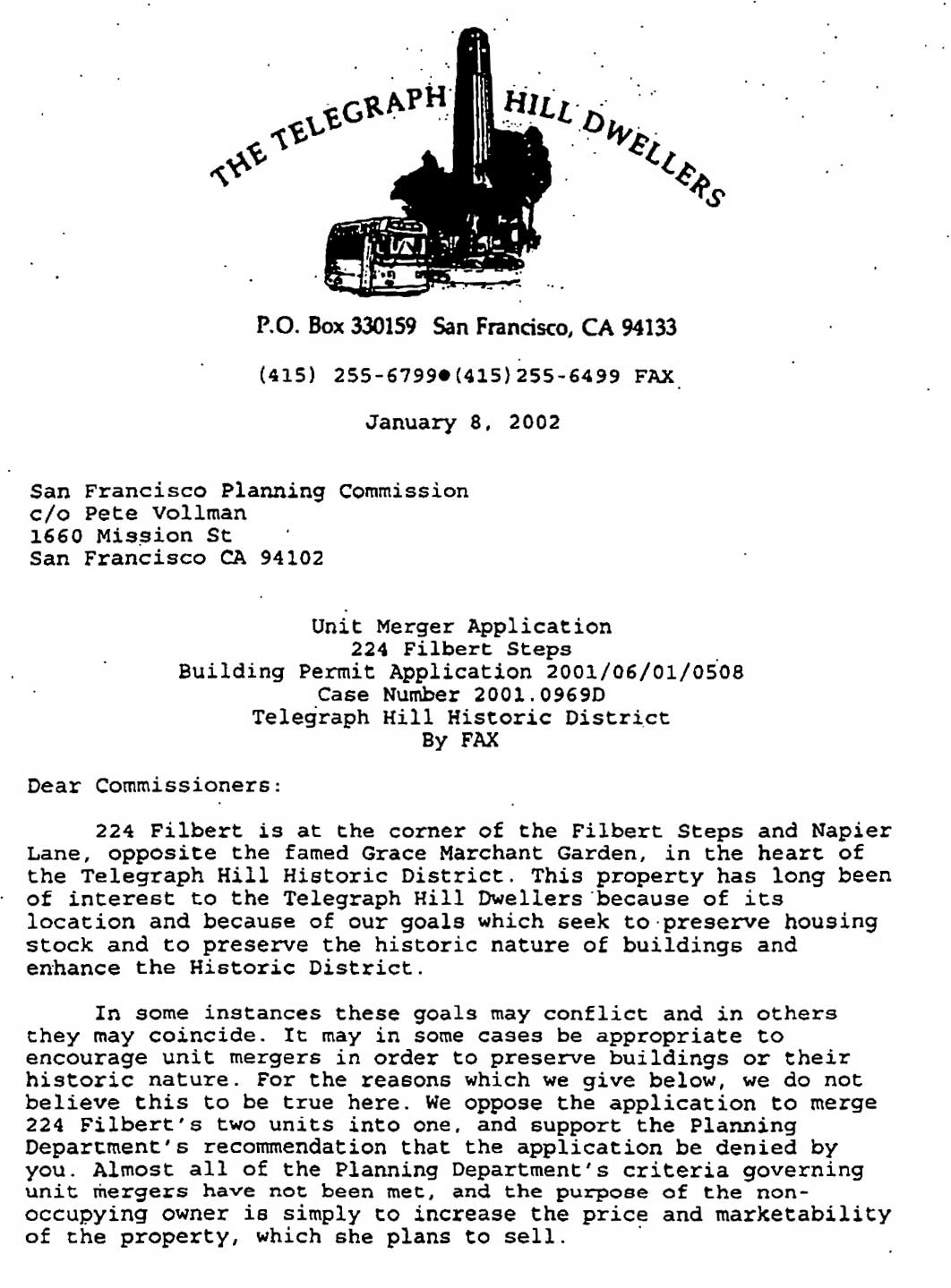 When Trafton acquired 224 Filbert in 2001, she paid $1.5M for roughly 1500 sqft of real estate, or approximately $1000 per sqft. At the time, this was very expensive for an older duplex of two small one-bedroom units. However, a single-family home of the same size could plausibly sell for $1.5M, and would retain its value better than the two individual units. It is likely that Trafton planned her conversion from the outset, and quickly acquired her “cover” permit to perform kitchen renovations soon after buying the property.

Aaron Peskin’s wife, Nancy Shanahan, had already paid the city to receive advance notice of any permit applications for 224 Filbert, and was notified when Trafton applied for her permits. Shanahan serves as the Vice President of the Telegraph Hill Dwellers as of the writing of this piece, and Peskin was their President for several years before his election. After discovering (likely through Shanahan or Peskin) that Trafton was filing for her permits, the THD wrote a letter to support Planning’s recommendation to deny the merger. My point with all of this is that there is no plausible way that the Peskins could have been ignorant of the illegal merger aspect of 224 Filbert. It even looks like it is fairly likely that they themselves are responsible for galvanizing the official opposition to the merger. 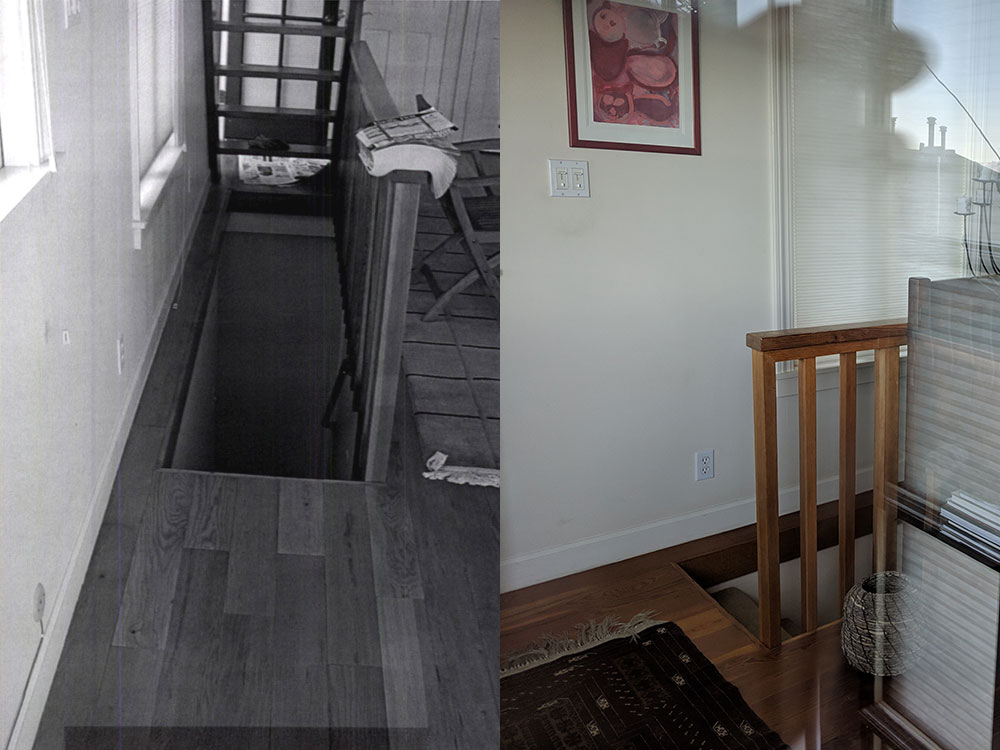 Left: A photo of the internal staircase from 2001 report. Right: the staircase remains as of 2019.

A large part of this case rests on information discovered during Planning’s staff-initiated discretionary review of the merger. According to this document, Trafton performed renovations and illegally merged the duplex before filing with the city to formally acknowledge the property as a single family home. The smoking gun in the report is a photo of a newly-built internal staircase connecting the two units.

In the face of the organized opposition from both Planning and the Supervisor of the neighborhood, Trafton withdrew her application. Because Trafton withdrew her application instead of continuing her discretionary review, she was not required to acquire permits to return the building to its original condition as a duplex. Trafton was left in a difficult position. She had purchased the property for $1.5M, but now had no way of selling the property for that much as a single family home. She also could not sell it as a duplex just to recoup some of her losses without performing additional work to undo her merger.

I, of course, cannot be privy to whatever discussions she had with Aaron Peskin, but she resolved to sell the property to Peskin’s parents for half of what she had paid. It is likely that this was a matter of convenience for her — it allowed her to get rid of what was becoming a toxic asset quickly and quietly. Even though the sale price was half of what she had paid, she wouldn’t have to bother with additional construction work to restore the property to a duplex. Peskin, in turn, would be one of few buyers who could safeguard this illegally merged home from city enforcement. This deal, of course, is an astounding act of political corruption and conflict of interest.

It is important to state, once again, that this home is absolutely not a duplex today. Disregarding the still visible internal staircase, if the home was still a duplex, one would imagine that Peskin was residing in one of the two units and renting out the other. Peskin is required to report his income as an elected official, but no such income from the rental of the other 224 Filbert “unit” has been disclosed, though he has disclosed income from his other rental properties.

Ironically, the permit page lists the building very clearly as a “2 FAMILY DWELLING”.

Strangely, though, this permit mentions only renewing older permits, and not undoing an illegal merger. Even more strangely, despite that, DBI closed its case on the complaint a few days after it was received. I have no explanation for why this happened, as DBI did not take any detailed notes on how this case was handled that I could discover. From how quickly the case proceeded from complaint, to permit acquisition, and finally to abatement, it seems fairly likely that Peskin pulled some strings to get the problem to go away quickly.

To reiterate, there is no version of events where Peskin innocently acquired a home that he didn’t know used to be a duplex. The fight over whether Trafton would be allowed to legitimize her merger happened only a year before he bought the house from her, and he and his wife were essentially the other side of that fight. There is no world where Peskin is conveniently unaware that his home used to be a duplex, because the city still says that it is a duplex on every current record and form related to the property.

There’s a simple case to be made that Peskin’s actions constitute the crime of graft (or extortion). Peskin blocked Trafton’s merger of 224 Filbert and then subsequently occupied it as a merged home. By secretly profiting from the very thing he purported to oppose, Peskin turned his $800,000 home into something worth much more. Taking Trafton’s purchase price at face value, a merged 224 Filbert was worth at least $1.5M. Essentially, Peskin’s use of his power in Telegraph Hill netted him at least $700,000. This transaction’s very existence is at minimum a clear conflict of interest and more likely an abuse of the power of office for personal profit.

I’d like to thank everyone who helped me think through this case. If this story made you mad, I’d appreciate it if you shared it with, oh, I don’t know, Peskin’s staff? The SF Ethics Commission? DBI? The media? If you want to know more, I’m happy to talk to anyone curious about the details. There’s a bunch of other interesting stuff that didn’t make the cut — ask me about how Trafton sold another two properties on the same street to Peskin’s family (this is true).

You can find me on Twitter at @fulligin or email me at me@vincentwoo.com.